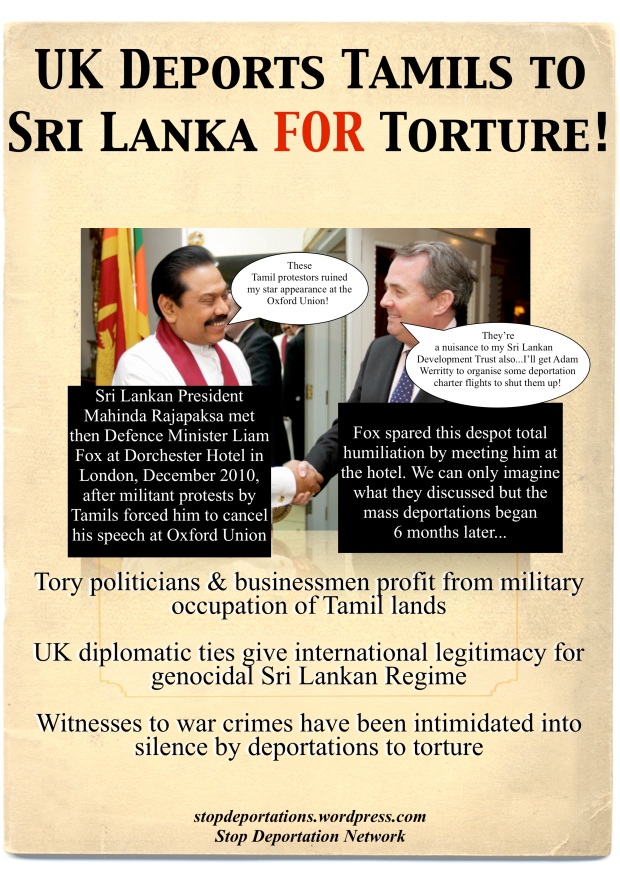 The UKBA seem to have outflanked mainstream NGO’s and media outlets by organising another deportation charter flight to Sri Lanka tomorrow, 23rd October, barely a month after the last flight went in September. This is an acceleration of their charter flight program to the island and follows their new Sri Lanka Country Policy Bulletin which slandered the work of Freedom From Torture, Human Rights Watch, Amnesty International and Tamils Against Genocide.

The point which mainstream media refuses to make is that British foreign policy drives these deportations to Sri Lanka and this overrides the human rights of Tamil asylum-seekers who will be tortured after their deportation, and that this torture serves the interests of certain British politicians and businesses. See my previous article on this blog about Liam Fox’s business interests in Sri Lanka.

This is ironic because even an establishment body, the House of Commons Foreign Affairs Committee, has reported this month how the Foreign and Commonwealth Office (FCO) is not being “as energetic as it might in impressing upon the UK Border Agency the degree of risk” faced by Tamil deportees. They further noted that “the Government should also clarify the division between the roles of the FCO and of the UK Border Agency’s Country of Origin Information Service [COIS] in gathering the intelligence needed to make accurate assessments of risk”.  This is clear evidence that the FCO exerts influence over the UKBA. And perhaps it refers to the shocking reference in the July 2011 UKBA COIS report on Sri Lanka where the British High Commission (BHC, an FCO employee) claim they:

“asked the Senior Government Intelligence officials if there was any truth in allegations that the Sri Lankan authorities were torturing suspects. They denied this was the case and added that many Sri Lankans who had claimed asylum abroad had inflicted wounds on themselves in order to create scars to support their stories”.

This scandalous claim was covered by Barrister Shivani Jegarajah on the freemovement blog at the time. But the full content of the letter (not included in the COIS report, but available to download here) reveals that the subject of correspondence between BHC and UKBA COIS is “Sri Lanka: Media Reports Following the Presidents UK Visit in November/December 2010”. This visit is when Mahinda Rajapaksa met Liam Fox and Adam Werritty in the Dorchester Hotel, as featured in the poster above, after the despot’s speech at the Oxford Union was cancelled. The FCO’s response to the UKBA’s request for ‘intelligence’ was morally disgraceful, but strategically consistent with the British Government’s long-term support for the Sri Lankan regime at the expense of Tamil peoples’ rights.

The FCO’s most senior civil servant, Matthew Gould, had numerous meetings with Fox and Werritty, although the government refuse to admit this. Fox’s resignation statement hosted on the Ministry of Defence website accidently (?) refers his dealing with Matthew Gould as Martin Gould, putting the public off the scent of Fox’s and the FCO’s collusion during the times of the most serious massacres of Tamil civilians in 2009, when Matthew Gould toured Sri Lanka in his role as Principal Private Secretary to the Foreign Secretary, just after Fox and Werrity had visited Mahinda Rajapaksa in Colombo to set up the Sri Lankan Development Trust. 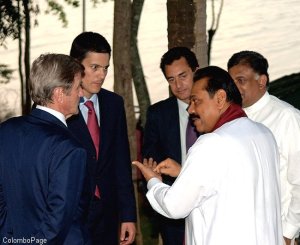